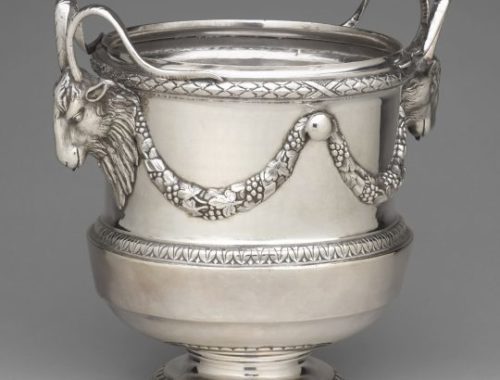 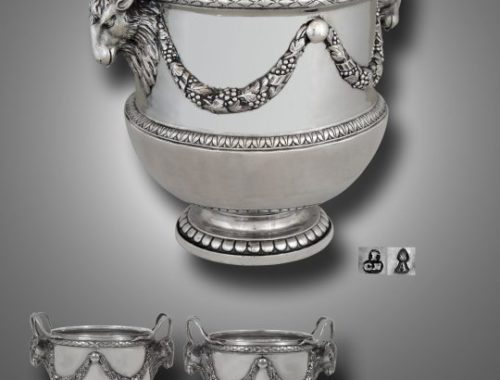 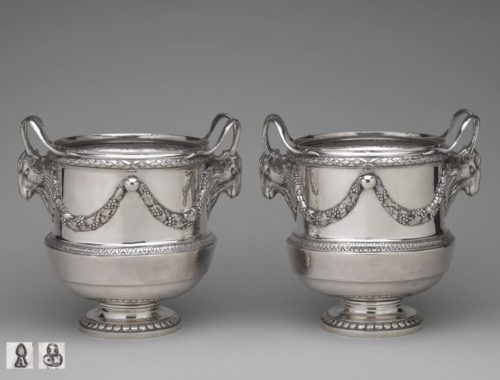 The wine coolers, important parts of a table service, have the form of a vase and a hammered corpus that is raised on a high, round, profiled foot. The foot is moreover adorned with a gadroons frieze. The corpus is divided in two: the lower part, slightly profiled, plain and quite vaulted and the upper, elaborately decorative. A frieze in the form of a cyma reversa (heart-shaped leaf-and-dart) marks the division of the body in a very artful way. The upper corpus is decorated with a cast and inset double garland made of wine leaves and wine grapes. This decorative motive not only highlights elegantly the object, but it leads the eye to the wonderful, cast, plastic ram heads and high handles in the form of horns. The rim of the wine cooler is adorned with a cast frieze, very nicely and decoratively executed.

Catherine the Great and the Silver Services

The tsarina Catherine II of Russia (1729-1796), called Catherine the Great, had organised a new Russian Empire since 1775. Many Governorates should now be united in stadtholders. For these new administrative and political structures, new general governors had to be appointed. When Catherine the Great was making travels to these new provinces, she sojourned in the governor’s residences, which were furnished and equipped with silver and vermeil-table services for the luxurious reception and stay, appropriate for a tsarina. The commissions of Catherine for such sumptuous, silver services not only provided her with the necessary courtly luxury, but they were also representative artefacts of her power and importance. Besides, they also formed a kind of treasure that she could have it melted down, if needed.

Catherine the Great gave orders to European centres of silver- and goldsmiths, like Paris, London, and Augsburg and also to St. Petersburg. Her goal was to acquire objects of a high quality and of a contemporary style. The objects made in foreign cities served also as stylistic models for the Russian orders.

Paul I (1754-1801), son and successor of Catherine (r. 1796-1801) had ordered shortly after his accession to power, the services to be brought in St. Petersburg in the Winter Palace. There, they acquired inventory numbers and dotted names (e.g. Kharkov). The history of the services in the nineteenth and twentieth century is not entirely known. It appears that the service of Kharkov was still in the Winter Palace during the nineteenth century (Folkersam 1907). In the twentieth century, some parts were brought to Moscow (the Kremlin Armoury and the Historical Museum), while other parts were given in auctions in diverse foreign countries.

The present pair of wine coolers comes originally from a set of eight of them and was part of the Kharkov Service.

Kharkov (Ukrainian name Kharkiv) was at the time of the tsarina part of the Russian Empire and it is today the second largest city of Ukraine. The silver service was made out of hundreds of parts. In 1907, there still existed 126 objects.

The service for the governorate of Kharkov was ordered in Augsburg, exactly like the one of Perm. Principal parts of the service have a very similar form to these of the Riga service, which were also ordered and made in Augsburg. Such similarities in form have for instance these wine coolers with those of the Riga service. The differences lay mostly in the ornamentation.

The form of the vessel as well as all decorative elements clearly reveals the early neoclassical style. This stylistic direction was prevailing in France since the mid-eighteenth century and it had soon conquered the whole Europe. Catherine the Great, as an important representative of the enlightened absolutism, had adopted the style very early. The design and composition of the style in silver objects was quite influenced from the work of the silversmith of Napoleon Robert-Joseph Auguste, who was also working for Catherine the Great. Patterns and models for the form of the objects as for the ornaments were to be found in various books on architecture, vases and ornaments.

Maker: Johann Christian Neuss was born in 1740 (Protestant). He became a master maker in 1766 and died in 1803. He was one of the leading silversmiths in Augsburg during the time of Neoclassicism.