Marks and tremolo line at the foot of the bell

EARLY COLOGNE BEAKER WITH RICH ENGRAVING. TWO MEDALLIONS WITH DEPICTIONS OF MORALITY AND A PERSONIFICATION OF JUSTICE 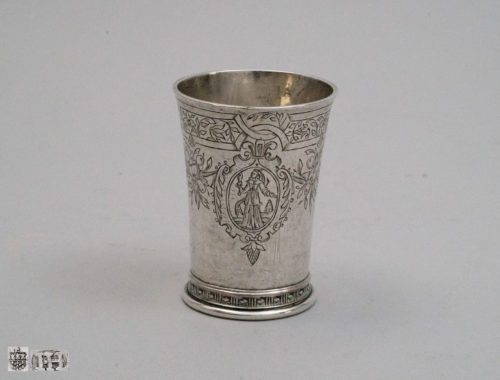 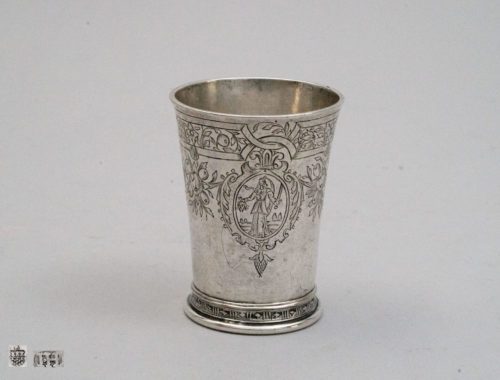 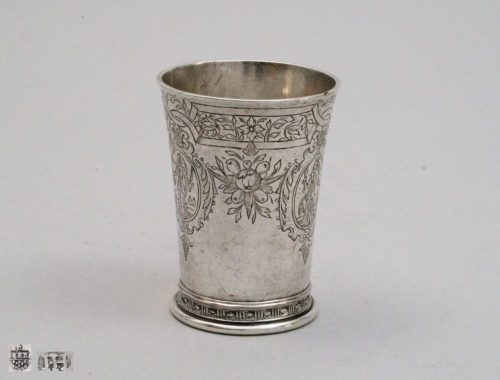 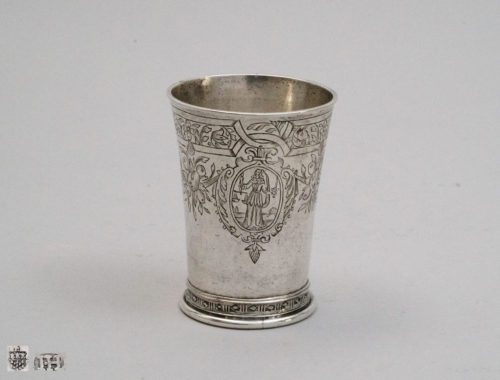 The high-quality, early silver beaker impresses with its elegant, slender shape and rich engraving: three high-oval cartouches with female figures, whose depictions stimulate thought, adorn its smoothly polished walls. They are connected to each other by rich fruit clusters. Lavishly engraved strapwork with curled tendrils and blossoms surrounds the edge of the lips. A diamond frieze surrounds the multi-profiled foot.

But what is shown on the cartouches anchored in the strapwork? One of the female figures holds scales in her right hand and a raised sword in her left: both are attributes of Justitia. Even if the emphasized chest and the belted upper garment ending in scraps of fabric pose riddles?!

The second female figure holds a severed male head with longer hair in her right hand and a raised sword in her left. Her breasts are bare, a veil wraps around her back: the iconography clearly points to Judith with the severed head of Holofernes, whose dramatic story is illustrated by Holofernes’ sticking out hair and Judith’s flying veil: The moving depiction clearly reflects the inner restlessness of the depicted. “Judith” with the head of Holofernes is known from the Donauer family register (between 1599 and 1608) and from an etching by Jost Amman (1568/1569).

The third female figure shows an elderly lady looking at herself in a mirror with a little devil sitting on her shoulder. In the background a peacock flaps its tail, the lady’s veil flutters excitedly in the wind. A well-known etching with a lady and these same attributes exists by Jacques Callot (1592 – 1635), created between 1617 – 1620. It bears the inscription “Superbia”: The personification of arrogance, the vanity of pride and high spirits belongs to a series of seven deadly sins. A theme that occupied Georg Pencz in the first half of the 16th century when he depicted Superbia with a convex mirror, peacock wings and a horse in front of a tree. Heinrich Aldegrever (1502 – 1555 /1561) shows Superbia in his engraving from 1552 with a bare breast, raised sword and peacock, with chain, papal hat and lion on a running horse.

All three of the cartouches end at the bottom with a hop umbel, a plant closely associated with intoxication. Thought-provoking depictions, ambiguous allusions and puzzles were extremely popular in the Baroque period. The baroque beaker, which is outstanding because of its engravings, is an excellent example of such an intellectual game.

Jacobus Hültz learned the goldsmith’s trade from Hermann Lycker between 1654 and 1662. He

received Cologne citizenship on October 31, 1674 and is mentioned in 1677 as a civil servant and in 1685/1719 as a fellow earner. One of his best-known works is the joke cup “Hansel im Keller” from 1678/80 and an ivory tankard with silver-gilt mounting. Two ciboria, a radiant monstrance, a wine jug, a book fitting and a spice jar as well as several cups have also been preserved by Hültz. A cup from 1685 is now kept in the Rheinisches Landesmuseum Bonn. The goldsmith Jacobus Hültz, who was particularly talented in hammering, worked as a goldsmith in Cologne between 1674 and 1719 and is one of the most important master goldsmiths in Cologne.