Maker’s mark: “PO/VIZ” for the master goldsmith Poviz, active around 1772 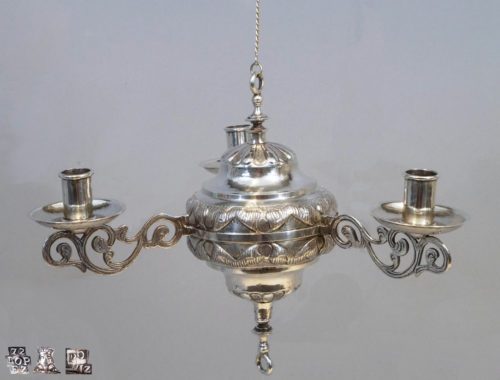 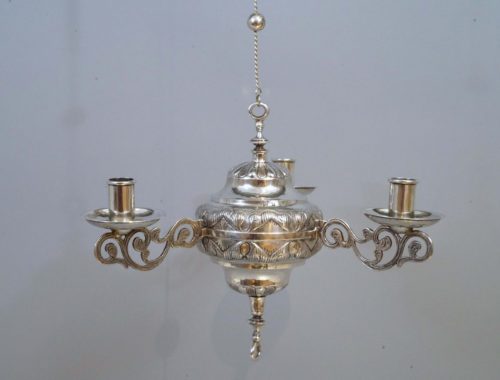 The spherical body of the chandelier is completely symmetrical and consists of a pear-shaped, highly oval shape that is constricted at the top and bottom. Starting from a semicircle, the multi-profiled, constricted ends narrow at the top and bottom to form a narrow pommel, which merges into a fastening ring on both sides. A finely worked tongue frieze serves as a transition between the center of the vessel and the constriction. The center of the body is covered with an alternating geometric pattern. Above and below a central silver circlet, symmetrically arranged isosceles triangles, each interrupted by small circles, protrude downwards and upwards. These stand out in front of a background made up of punched and chiselled stripes. From the smooth, silver band, which serves to structure and stabilize the candlestick, protrude three candlestick arms decorated with engraved floral motifs and cast according to the same model. From below, they support a polished candlestick with a spout and a flat drip tray. The corpus and all three drip plates bear the marks of the master and inspector as well as the city mark. A twisted silver cord is used to hang the chandelier, which is reminiscent of “eternal traffic lights”.

The strikingly noble-looking chandelier was created at the beginning of classicism in Burgos, at a time when a young generation of goldsmiths was turning their backs on the pompous splendor of the Baroque period and propagating new classic forms and emphasizing the functionalism of the objects. Artfully worked tendrils are often used as candlestick arms in the goldsmith’s art. The fine engraving and chasing on the openwork arms and body of the candlestick contrasts with the smoothly polished surfaces in the center and on the spouts of the candlestick. Geometric and vegetal shapes as well as smooth surfaces – all of these elements combine with the symmetry of the structure to create a balanced balance and give the chandelier an extraordinary, self-contained effect.

In the 18th century in Burgos, becoming a master and the labeling of goldsmith objects was precisely defined: anyone who wanted to become a goldsmith began his apprenticeship at the age of 15 to 18 with a master silversmith. He committed to working and living with his master for between five and seven years until he had sufficient technical and manual knowledge and his goldsmith training was completed. Works executed in Burgos had to be of a certain alloy, bear the symbol of the city of Burgos (a crowned head under three castles) and the master’s and hallmarks. The inspector was employed for 6 years (but sometimes worked longer) and from 1741 possessed a stamp with the year of the start of his activity. From 1752 onwards, the works had to be marked by an inspector with two hallmarks: the inspector’s mark mentioned above and a city hallmark of Burgos assigned to him. In this case we are dealing with the hallmarks of Eusebio López, who was the only active assayer in Burgos between 1772 and the end of the century and marketed numerous goldsmith works by various masters. Unfortunately, the literature hardly mentions more than a name or a master’s mark of numerous master goldsmiths, including “Poviz”. The city of Burgos is on the important trade route between Madrid and Paris and on the Way of St. James. It has been an important trading center in northern Spain since the Middle Ages. To this day, most of the surviving goldsmith work from Burgos is in the possession of the church, for example in the Burgos Cathedral.

Three-armed chandelier in the form of a hanging basket

The shape of candlesticks of this type is reminiscent of “hanging baskets of eternal light” such as are often found in front of altars. Candlesticks with a central spherical body and three vegetal candlestick arms have survived very rarely, one of them is shown e.g. in Lena Saladina Iglesias Rouco: Platería hispanoamericana en Burgos”, Burgos 1991. 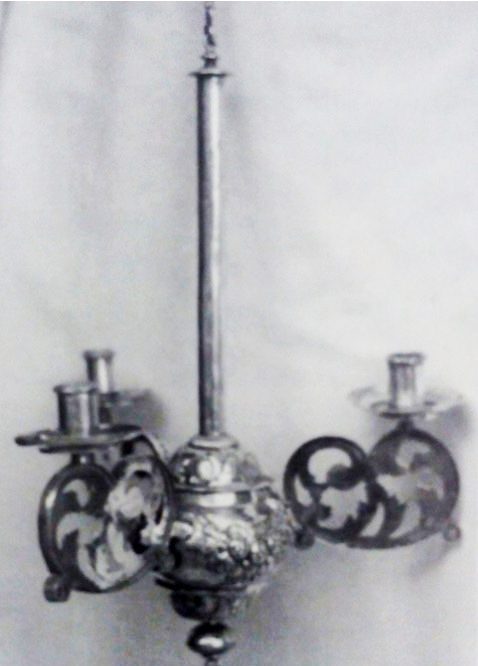