Numbering 1 to 4 engraved on the bottom. 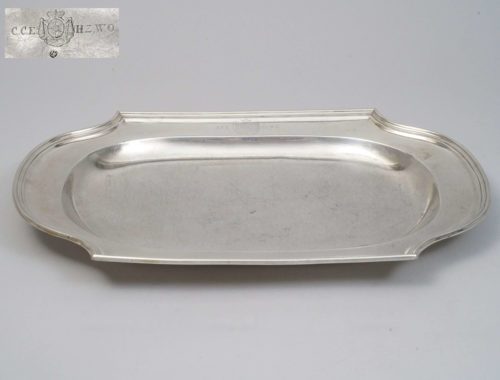 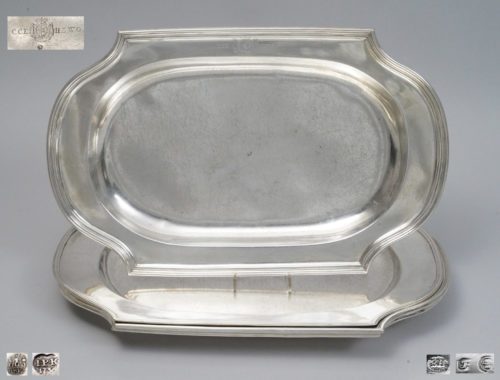 In the beginning there was a dream: Carl Christian Erdmann Duke of Württemberg Oels fell asleep in the forest, tired from the hunt. The avid hunter dreamed that he would found a city right where he had taken a nap. A memorial, the so-called Erdmannsstern, commemorates this event. From 1763, the planned residential city of Carlsruhe came into being; Duke Carl Christian Erdmann had a handsome hunting lodge built in 1749. It goes without saying that everyone who was a guest at the residence on hunting trips or other occasions had to be fed befittingly. A festive table was a central element of baroque representation in the 18th century. Every self-respecting ruler endeavored to impress his guests with the finest silver tableware. Duke Carl Christian Erdmann had his silverware made in Breslau. That was obvious, because Breslau – where the duke ruled as governor – had been the center of silversmithing in Silesia since the late 16th century and, when it came to silver production, was one of the hot spots in Germany alongside Augsburg and Nuremberg. 88 plates, 8 bowls and 24 platters with the client’s coat of arms and monogram, which were made by various Breslau goldsmiths from the 1740s onwards, are a brilliant testimony to the exquisite table culture in Carlsruhe Palace. Since all surviving dinner plates have an inventory number (the highest ends at 162), one can guess how extensive the service must have been originally. But for the sequence of courses that was common at the time – the so-called “Service à la Française” – you also needed a large number of service parts: after each course, in which different dishes were offered at the same time, the table had to be cleared and set anew for the next course. Depending on the occasion, one reckoned with two to four plates per place setting, so that at Carlsruhe Castle there could be enough set for at least 30 people.

The fact that members of the Protestant House of Württemberg became territorial princes in Silesia was the result of political intrigues at the end of the Thirty Years” War. Since the castles of the Württemberg-Weiltingen side line, which had only existed since 1617, had been either destroyed or confiscated by enemy troops, several princes and princesses were sent to the court of Duke Ernst the Pious in Gotha in Thuringia to be educated. Among them was Silvius Nimrod, born in 1622, who would eventually become the founding father of the first Silesian line of the Württemberg family. Since the emperor was very keen to give Catholicism more space in Silesia, it had to be expected that Ferdinand III. on the death of the last Protestant duke of Oels, the Protestant principality would move in and be reassigned to a Catholic partisan. In order to minimize this danger, a Protestant bridegroom was sought for the only daughter of Karl Friedrich von Münsterberg-Oels (1593 – 1647), Elisabeth Marie (1625 – 1686). This was to ensure that the principality of Oels, which had been Protestant since 1538, was preserved during the Reformation.

Duke Carl Christian Erdmann von Württemberg-Oels (1716 – 1792) had the first Carlsruhe Palace built in 1750. Just a year later it burned down and was replaced by a new building. In 1798 this property also went up in flames, only to be replaced again by a new castle. The castle and the cavalier houses went up in flames when Russian troops invaded in 1945 and the ruins were later removed