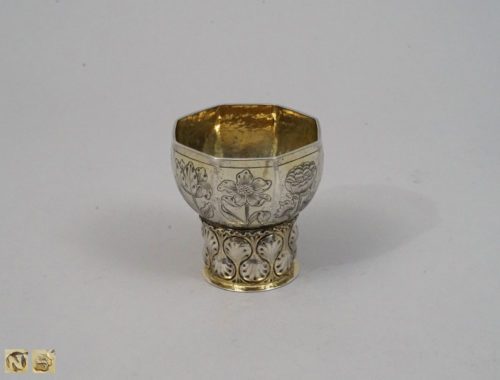 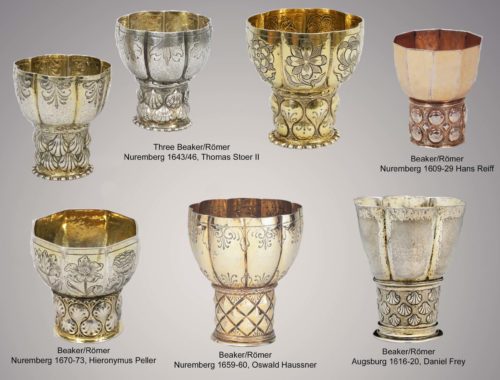 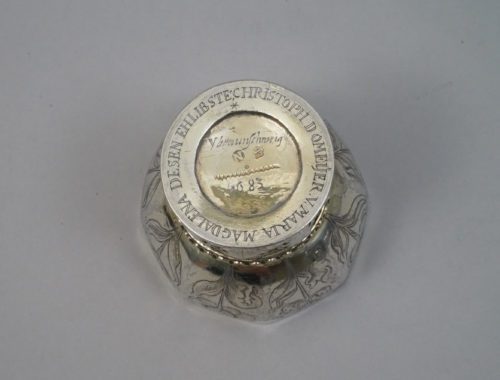 On a spread base, cylindrical shaft decorated with shells, the octagonal bowl engraved with stalked flowers, the underside engraved with the date 1683 and the inscription:

The History of the Römer

The shape of the Römer is derived from a medieval glass shape. These have been mentioned in literature since the middle of the 15th century. In the 17th century, the Römer was given its typical shape: a spun conical foot, a cylindrical central part (shank) with nubs, and a large, rounded bowl. The drinking vessel was mainly used in Central and Northern Europe. Glass Römer are a common feature in 17th-century Dutch still lifes. It is also known that in the 17th century, a large number of Römer were made of glass at that time, especially in Holland, Bohemia and England. They were only made of metal at the end of the 17th or 18th century.

The Helga Matzke Kunsthandel is currently presenting 6 more Römer from Augsburg and Nuremberg.

The city of Nuremberg, along with Augsburg, is one of the most important cities in Germany for goldsmith art from the 16th to 18th centuries. The specialty of the Nuremberg silver and goldsmiths were the so-called bump cups. Everyone had to make a columbine cup for the master’s examination, which required a lot of technical skill, especially when it came to beating.

The present Römer is a wonderfully embossed drinking vessel that also showcases the skill of the silversmith.