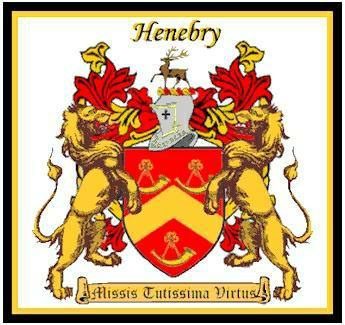 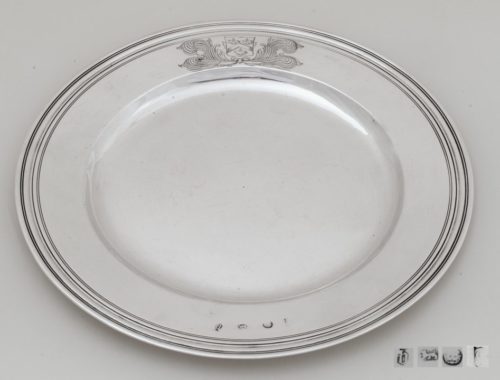 The present plate is an excellent object of English silver of the late 17th century. The platter of the dish is round and the large profiling on the rim is the only décor of it. The coat of arms is dominant on this dish. The plume mantling of the engraved coat of arms is stylized and the engraving is generally very artfully executed. The hallmarks are on top of the dish, a placement that was usual at this time (cf. Jackson 1911: fig. 254/V. I/p. 244).

English Silver in the Last Quarter of the 17th Century

The last quarter of the 17th century is as “Silver Age” England’s mentioned. After the reign of Charles II (1630-1685) there was political uncertainty in England. There was a small production of new silver objects and moreover old silver was being melted down. However, the commands for silver objects were raised after 1685 (James II period) with the Restoration of the monarchy.
The majority of dishes and large platters have a simple form during the 17th century. The forms are often based on simple dishes made of pewter. The decoration is often a coat of arms, which was engraved in a stylized plume mantling.

The coat of arms is original, executed on the time of fabrication of the object. It presents in a shield three bugle horns, two on top of a chevron and one underneath it. The coat of arms is precisely and artfully engraved. It belongs to the clan of Hennebery or Henn. Palatine. Germans from Henneberg (Palatinate was then a part of the Kingdom of Bavaria) emigrated to Ireland, Limerick/Tipperary about 1709.

Jackson, Ch. J., 1911, An illustrated History of English Plate, ecclesiastical and secular in which the development of form and decoration in the Silver and Gold Work of the British Isles form the earliest known examples to the latest of the Georgian Period, Bd. I-II, Plauen i. Vogtl.: C.F. Schulz & Co.
Jackson, Ch., J., 1921, English Goldsmiths and their marks, London: MacMillan and Co. Limited