City’s hallmark: for Kassel, a shield with cloverleaves and the date letter “I”. The hallmark presents a shield, which is separated with a diagonal balk from the upper left to the bottom right. In the upper field there are six three-leaf clovers arranged and in the lower field there are seven. The date letter “I” was applied during two different times within the period from the 24.06.1766 to the 24.06.1789. In the case of the present candlesticks, it is reasonable to suppose due to the coat of arms (see below) that the date letter refers to the first period of application, i.e. 1766-c. 1774 (cf. Neuhaus & Schmidberger 1998: nr. 13a).
Maker’s mark: monogram “IB” in a curved shield for Isaak Baucair (cf. Neuhaus & Schmidberger 1998: nr. 99a/p. 324).
Coat of arms: House von Stiernberg 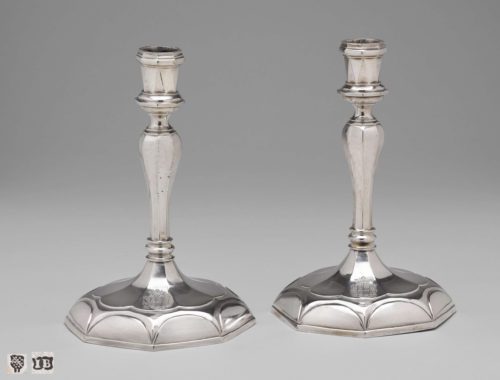 This pair of candlesticks presents an elegantly decorated standing type of candlesticks. The foot presents on its whole an angular form with eight profiled edges and has a light vaulted shape. Its eight edges are decorated through chased lunettes. Around the lower edge of the shaft there is a decoration of a running, bright, lobed, chased frieze. On one of the sides of this decoration of the candlestick there is engraved the coat of arms of the house von Stiernberg. The slim shaft is simple, through eight edges decorated. The joint between the shaft and the foot is through three ring-rows decorated. A very fine curved joint connects the shaft with the upper part of the cylindrical spout. The spout features an edged, profiled rim with nozzles embossed into pyramid shapes.

The engraved coat of arms at the foot of the candlestick is that of the house von Stiernberg. The coat of arms present a shield parted quarterly. At the first and forth quarterly a pacing steer is depicted, while at the second a tower and at the third quarterly a star. On the helmet there is a crown and on both sides of the shield pacing steers.

According to the Großes Wappenbuch of Siebenmacher, the family von Stiernberg has the following history: “Volrad Stiern came with the landgrave Frederick I of Hessen, king of Sweden, to Germany and he was raised to nobility with “von Stiernberg”. His descendants were in the province of Kurhessen installed and employed” (Siebmacher : 27/Bd. 20). The line of the family begins with “Conrad (Kunz) Stirn (Stiern), 1557/8, who was a citizen and owner of country estate in Homberg, at Efze (Hessen/Kassel). The family-member of the house von Stiernberg Friedrich Wilhelm Stirn von Stiernberg (1738-1822) was a Colonel from Hessen-Kassel and personal adjutant of the landgrave Frederick II. He called himself “von Stiernberg” on a later period (cf. Hessische Biografie). His brother, Friedrich Carl Stiern (1750-1814), was already a sergeant of the Emperor Joseph II in Vienna and was dono dedit raised to nobility with “von Stiernberg” on the 13th January 1769 (cf. Gundlach 1895: 56 & Stammtafel). The father of these brothers, Wolrad Stirn (1695-1763), was since 1736 a cabinet-secretary of the king Frederick I of Sweden, a landgrave at Hessen-Kassel, then higher councillor and since 1760 confidential councillor (cf. Hessische Biografie).

From the above, it could be thus gathered that this pair of candlesticks were executed on the occasion of the raise to nobility and the bestowal of coat of arms of Friedrich Carl Stiern in 1769. The existence of the coat of arms on the candlesticks is in all cases a feature of a noble provenance.

Isaak Baucair, Goldsmith, born on the 10th September 1723 as the elderly son of Pierre Baucair, who was born in Metz. Apprenticeship: from mid-April 1737 to 06.01.1742, at this father workshop; he started his masterpiece on the 09th March 1753 and presented it on the 23rd June 1753. He became a master in 1753. He is mentioned as a guild master from 24th June 1778 to 24th June 1785 and as a goldsmith of the court since 1784. He died on the 25th March 1793.
The Father of Isaak Baucair, Pierre Baucair, came from Metz, where he also did his goldsmith apprenticeship. He was one of the most important Huguenot goldsmiths of Kassel during the first half of the 18th century. Pierre Baucair at the latest until 1740 had many orders and since 1753 together with his son Isaak had to execute many orders for silver for the court.
There are today many silver objects from the hands of Isaak Baucair kept at the State Museums of Kassel as well as in private collections.