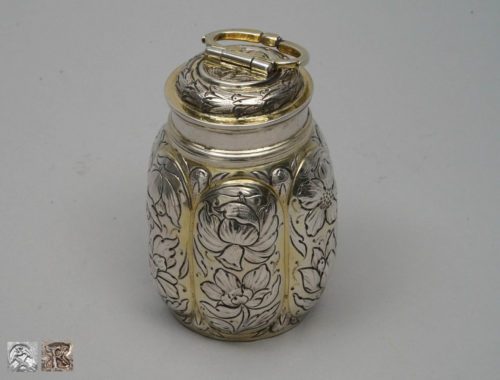 The finely crafted screw-top bottle covered with a floral decoration rises above a smooth, six-pass shaped base plate. The wall of the vessel arches slightly outwards in the middle and tapers towards the edge of the lid to an oval shape. It is divided into six long oval fields by an engraved double line, each of which houses two different flowers arranged one above the other. Among them are precious flowers such as daffodils and tulips. The gusset fields below the lid and the intermediate fields above the bottom of the vessel are decorated with stylised fruits and leaves. The lower area of ​​the lid is stepped up and down to increase stability and profiled several times. As is common practice, it was left smooth for better handling. The overlying arched and recessed surface of the lid is surrounded by a leaf-wreath frieze that was popular with screw-top bottles in the second half of the 17th century. A handle formed from two stylised volutes and connected to the lid by a hinge serves as a movable handle. The embossed, punched and chased flower decoration is of outstanding quality, the plasticity of which is masterfully emphasized by various goldsmithing techniques and the original partial gilding.

The special place of origin of the screw-top bottle

Schemitz was considered an Eldorado of the Middle Ages due to its rich silver and gold ore deposits. As one of the most important medieval cities in Europe and the third largest city in the Kingdom of Hungary, it cast a spell over not only goldsmiths and Freemasons but also scientists. Gunpowder was first used here in mining to promote productivity.

Most of the 17th century screw-top bottles preserved today are made of pewter, earthenware, and silver-mounted glass, but rarely of pure silver. In Carl Hernmarck’s “The Art of European Gold- and Silversmiths 1450–1830, Munich 1978”, no screw-on bottles are described as storage vessels. Only a few collections, for example the Germanic National Museum in Nuremberg, have silver screw-top bottles. These have not been preserved to a large extent, as they often showed signs of use due to the sensitivity of the thread on the cover and had to be melted down. The bulbous, richly decorated screw-top bottles were not used as canteens for drinks, but to store particularly valuable spices such as ginger.

According to Rosenberg, five other works by Tobias Knoht, initially known as “Meister TK”, are known. These were shown in exhibitions in Vienna and Budapest: A taller screw-top bottle (17.5 cm) with ornamented bosses and a partially gold-plated cup with an engraved coat of arms, were according to R3, p. 591 in the Catholic Church in Schemnitz. A gilded hump cup with an inscription from around 1690 was kept in the National Museum in Budapest. All three silver objects were exhibited together with a white and silver spoon in Budapest in 1884, which indicates the high quality of the goldsmiths objects of the master Tobias Knoht.

The screw-top bottle was originally owned by Hallam Tennyson, II. Baron Tennyson (1852–1928), the son of the poet Alfred I Baron von Tennyson. It was owned by the family for a long time and entered the art trade in 1974.